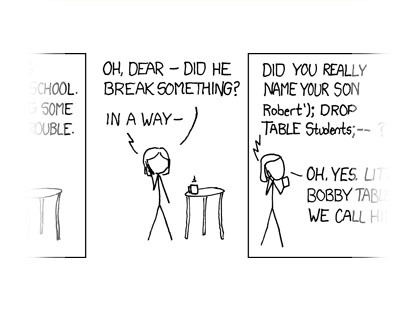 Little Bobby Tables shows us why it’s a good idea to sanitize your database inputs to avoid SQL injection attacks:

In case you’re not familiar with the concept of SQL injection attacks, here’s a quick summary:

This is especially dangerous for some database types that allow executing arbitrary shells or reading/writing arbitrary files. Now, by exploiting a security hole in your database an attacker has full access to your system.

Like Little Bobby’s mom says, it would be great if all our software properly sanitized their database inputs to stop SQL injection attacks. In addition to sanitizing inputs, there are plenty of other ways to limit the severity of attacks: limiting database privileges, removing unused stored procedures, disabling unneeded functionality, etc. Unfortunately, there’s a lot of code out there issuing queries against databases, and a lot of database configurations, and it’s very difficult to ensure all of them have been audited and fixed. All it takes is one vulnerability for an attacker to start executing arbitrary sql against your database.

So if you assume you’re not going to fix all the bad code out there, how do you protect your database against malicious intent? Another way to provide security is to detect attacks by looking for the things an attacker does after they’ve exploited a vulnerability:

Detecting these types of behaviors is exactly why we wrote sysdig falco.

How Sysdig Falco Can Help

Sysdig falco is an open source, behavioral activity monitor designed to detect anomalous activity in applications. Falco is powered by a set of rules that identify suspect behavior based on the system calls that applications perform. Falco works in containerized, virtualized, and bare metal linux deployments. Here’s an example of a falco rule:

The rule write_binary_dir detects unexpected writes to files below known binary directories. The condition field is a sysdig filtering expression that examines all system calls and identifies those system calls that represent suspect activity. This is not just limited to system calls and their arguments. Sysdig libraries build up low-level system call information and system state into events that provide a rich view into the state of an application. Sysdig also has support for containers and orchestration frameworks like mesos, kubernetes, and docker swarm.

When an event matches the rule’s condition, falco sends a notification using the rule’s output and priority fields.

This example also shows some additional features that falco’s ruleset provides on top of sysdig filtering expressions. Falco’s ruleset can also contain macros and lists–reusable snippets that can be included in other rules to aid in legibility.

Now let’s show how falco’s rules can be used to detect an attacker’s malicious activity after performing a SQL injection attack. Most of these rules are taken verbatim from the 0.3.0 rule set.

One thing an attacker might do is try to read sensitive files like /etc/shadow to obtain things like user/password lists. Here are falco rules that detect this behavior:

There are actually two rule variants. The first detects any attempt to access a sensitive file, with exclusions for known trusted programs. The second detects an attempt by a program to access a sensitive file, after a configurable initial period (the proc_is_new/proc.duration <= 5000000000 macro). This is useful for some programs, including databases, that read files at startup while they load user/account information, but don’t tend to access them once they are up and running.

An attacker might also try to overwrite system files like files below /etc/, etc, to change a server’s configuration. Here’s how we can detect that in falco:

The macro write_etc_common does most of the work, looking for the attempt to open a file below /etc/ by a non-trusted program. write_etc uses that macro along with proc.name=fbash, which is a way to identify installation sessions. See our blog post for a discussion of pipe installers and installation sessions.

An attacker might also try to spawn a shell after exploiting a vulnerability. Here’s how falco detects this behavior.

The rule looks for any attempt to run a program bash when the parent program is not in a set of programs known to spawn shells. Note that database programs are not in the list, so if someone were to exploit a loophole to invoke a shell, falco would detect it.

An attacker might also install software that opens a network connection to “phone home” to an attacker. They could do this in a few ways:

Here are falco rules that can detect this behavior:

The first rule detects any attempt by a coreutils/user management binary to open an inbound or outbound network connection. These programs are not expected to perform any network activity, so if they did, it’s a sign that they have been tampered with.

The second rule looks for abuses of mod_php/mod_perl, detecting any network connection by a program who has apache somewhere in its ancestor tree (the proc.aname=apache part).

We’ve shown that SQL injection attacks can allow an attacker to gain privileged access to a target system. In the worst case this could include the ability to read/write arbitrary files and spawn new programs.

We’ve shown how sysdig falco can be used to provide an additional layer of protection against these attacks by detecting the activities the attacker performs after exploiting the vulnerability.

Hopefully this gets you excited about sysdig falco. Now go download falco and start using it for yourself!

By the way, we’re always looking for new contributions to the rule set. Please add any rules that would be helpful for the community!