This article is intended to be a hands-on walkthrough over the multiple features and security policies available in Sysdig Secure. We will start from a simple use case scenario, configure different security rules and also play the attacker’s role to check their effectiveness.

Our scenario is based on the famous Docker’s example-voting-app. You can follow the examples verbatim, or just adapt to your own test scenario, the rules are easily transposed or adapted, as you will see.

Assuming you have a working Kubernetes cluster, a Sysdig Secure account (if not request a free trial here!) and the latest version of the Sysdig agent is already installed on your hosting nodes, let’s spawn our Kubernetes application:

And apply the yaml files inside in the correct order:

After a little while you should get something similar to this:

You can directly point your browser to the “vote” or “result” services. The “voter” container will automatically generate traffic for you in any case.

Once you log in Sysdig Secure your will find an infrastructure overview, much like the Explore tab in Sysdig Monitor. In the same fashion, you can configure the grouping: physical nodes, containers, Kubernetes deployments, etc. The number you see on the right corresponds to the security events that happened during the time frame you selected. You have three options to display these events. Notice the elements are color-coded, the entities have a green background in this example because there are no security events in the time window I selected.

If you click on the Policies tab at the top, you will see a wealth of pre populated default security policies, like:

These policies have been designed to cover the most common container-related security threats, but of course you can adapt them to your scenario disabling some of them, modifying others and creating your own policies from scratch. You can classify them into several Severity levels, set an Scope using for example Kubernetes metadata (namespaces, deployment, pods, etc). This specific rule fires if there is any write operation under the /etc directory, we will comment about the internal rule syntax later on in this article.

There are several Actions that you can perform once the alert is fired: * Stop the container * Pause the container * and/or create a capture file for deeper inspection and forensics

Immediately, the pod will be killed and you will be expelled from the shell.

You will be able to see the following events in your stream:

You can see the square symbol representing that the container has been stopped. It also detects the interactive shell we have spawned.

Will prompt this event:

If you click on it, you can read the specific detail of what actually happened in your container:

You can click on the View commands button to get a list of the user commands associated with the event.

Take a minute to read the default policies, you can probably reuse or adapt most of them and you will also get some initial ideas about creating your own policies.

Creating your own Docker security policy: rules and patterns

Whitelisting (forbidding everything by default and then explicitly list allowed items) is not always possible or practical, but when it is, it’s a extremely useful security tool, since it offers a level of protection against threats you have not even planned for.

The containers and microservices paradigm make whitelisting much more straightforward. Containers are, by design, simple machines with few moving parts. Let’s use this trait to our advantage and create some custom policies!

Logging in your ‘worker’ container or inspecting its contents, you will realize it only needs to execute:

That’s the entrypoint and that’s all that this container does. Any other process in execution would be extremely suspicious.

Now if you click on Edit Rules you will be able to read the text version of the default Sysdig Secure policies on the right side, and write your own rules on the left side editor.

A detailed description of the rule syntax is available on Sysdig Falco wiki, but the ones we are going to show are quite self-explanatory. On this case:

This rule will fire if there is a process different than java (condition). The output will be parametrized with the command line and container id involved in this alert.

Save this rule, choose this rule for the policy as shown in the example above, make sure the rule is enabled and save the policy.

Spawn a shell in the worker container and write a command like ls. The ls process is not in the list and the container will be stopped:

If you click on this item you will see the detail we configured in the rule:

Containers should only write in a small set of variable data directories, most of the files of a container are typically static.

This time, we are only going to notify, we don’t want to stop the container if some process writes a logfile we didn’t expect, for example.

First, we are going to declare a macro defining allowed directories:

The /data directory is used by redis, we allow the other two to avoid firing the alarm while spawning a shell.

And the rule itself:

Any open_write event for a directory not contained in the last macro should fire the alarm.

You should be able to find this event and description in your stream:

Inbound and outbound connections have also a very delimited specification in microservices infrastructure. Even if you have firewalling in place, you want to get notifications when unexpected connections are attempted, as this is usually the first symptom of a security break in.

Our ‘result’ containers just need to connect to the PostgreSQL database and wait for connections in the HTTP (80) port.

If you want to receive an alert on unexpected outbound traffic you can write a rule similar to this one:

We are going to create a policy similar to the other two using this new rule, but let’s enable the Sysdig capture this time:

Note the blue capture icon associated with this specific alert.

If you click on the Captures tab, you will be able to browse every capture file associated with this or any other rule.

From right to left, you can delete the capture file, download it to your computer, see the associated event, or directly open it on Sysdig Inspect (the orange shovel icon).

Once you click on the shovel icon, you will be presented to an interface similar to this one: 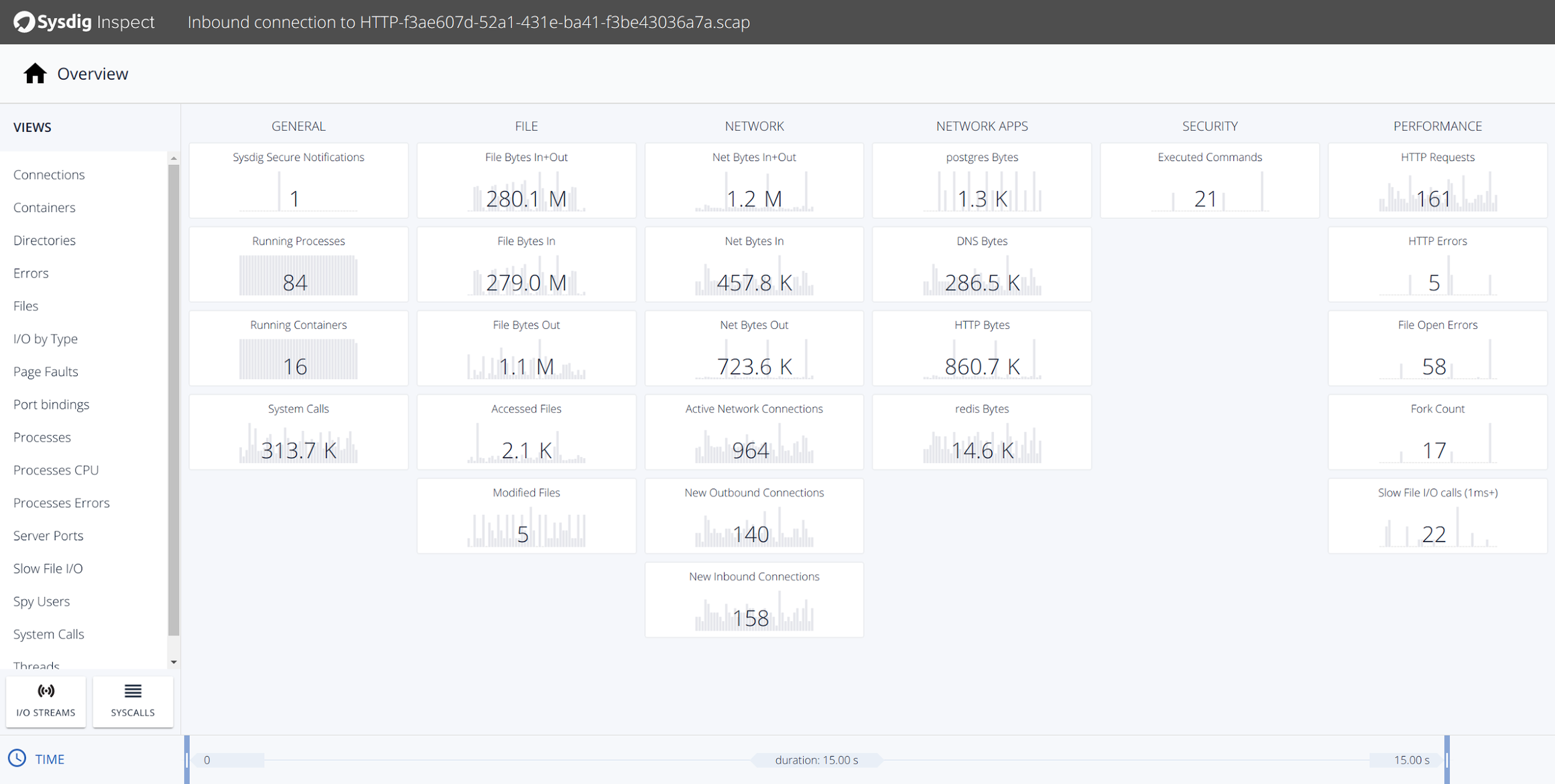 If you analyze the file operations associated with this event, you can see the actual files that were modified in your system during this attack. The container and microservice design patterns brings us the opportunity to write very strict and specific security rules. Same ideas and techniques that we apply to monitoring are now available to design your container-oriented security policies. Sysdig Secure and Sysdig Inspect demonstrate that a nice interface is not at odds with powerful rules using the maximum resolution available in any Linux system, its system calls.

Get a free Sysdig Secure trial today and start creating your own Docker and microservices native security policies!