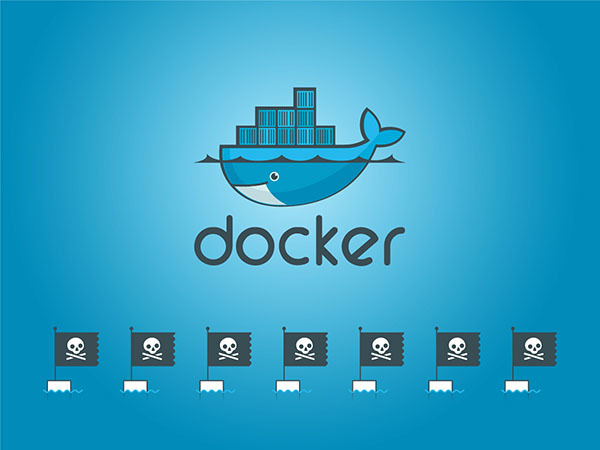 Docker security: security monitoring and security tools are becoming hot topics in the modern IT world as the early adoption fever is transforming into a mature ecosystem. Docker security is an unavoidable subject to address when we plan to change how we architect our infrastructure.

Docker comes bundled with some neat security safeguards by default:

There are, however, some specific parts of Docker based architectures which are more prone to attacks. In this article we are going to cover 7 fundamental Docker security vulnerabilities and threats.

Each section will be divided into:

Docker vulnerabilities and threats to battle

Description: If any attacker compromises your host system, the container isolation and security safeguards won’t make much of a difference. Besides, containers run on top of the host kernel by design. This is really efficient for multiple reasons you probably know already, but from the point of view of security it can be seen as a risk that needs to be mitigated.

Best Practices: How to “secure a Linux host” is a huge theme with plenty of literature available. If we just focus on the Docker context:

Seccomp allows you to filter which actions can be performed by the container, particularly system calls. Think of it as a firewall, but for the kernel call interface.

Some capabilities are already blocked by the default Docker profile, try this:

You can create custom Seccomp profiles for your container, disabling for example calls to chmod.

Editing the file, you will see a whitelist of syscalls (~line 52), remove chmod, fchmod and fchmodat from the whitelist.

Now, launch a new container using this profile and check that the restriction is enforced:

Description: The “container breakout” term is used to denote that the Docker container has bypassed isolation checks, accessing sensitive information from the host or gaining additional privileges. In order to prevent this, we want to reduce the default container privileges. For example, the Docker daemon runs as root by default, but you can create an user-level namespace or drop some of the container root capabilities.

Looking at previously exploited vulnerabilities because of default Docker configuration:

“The proof of concept exploit relies on a kernel capability that allows a process to open any file in the host based on its inode. On most systems, the inode of the / (root) filesystem is 2. With this information and the kernel capability it is possible to walk the host’s filesystem tree until you find the object you wish to open and then extract sensitive information like passwords.”

By default, the root account of a Docker container can create device files, you may want to restrict this:

The root account will override any file permissions by default, this is very easy to check: just create a file with an user, chmod it to 600 (only owner can read & write), become root and you can read it anyway.

You may want to restrict this in your containers, specially if you have backend storage mounts with sensitive user data.

Create a random user and cd to it’s home. Then:

Multiple security scanners and malware tools forge their own raw network packages from scratch, you can also forbid that:

Check out the complete list of capabilities here and drop anything you containerized application doesn’t need.

By default, if you create a container without namespaces, the process inside the container belongs to root from the point of view of the host.

But we can create a completely separated user namespace. Edit the /etc/docker/daemon.json file and add the conf key (be careful not to break json format):

Restart the Docker daemon. This will create a preconfigured dockremap user. You will notice this new namespace is empty.

Now the nginx process runs in a different user namespace, increasing the isolation of the containers.

Description: There are plenty of Docker images and repositories on the Internet doing all kinds of awesome and useful stuff, but if you are pulling images without using any trust and authenticity mechanism, you are basically running arbitrary software on your systems.

Docker will let you pull and run anything you throw at it by default, so encapsulation won’t save you from this. Even if you only consume your own custom images, you want to make sure nobody inside the organization is able to tamper with an image. The solution usually boils down to the classical PKI-based chain of trust.

Deploying a full-blown trust server is beyond the scope of this article, but you can start signing your images right away.

Get a Docker Hub account if you don’t have one already.

Now try to retrieve the image you just uploaded:

You should receive the following error message:

Now that DOCKER_CONTENT_TRUST is enabled, you can build the container again and it will be signed by default.

Now you should be able to push and pull the signed container without any security warning. The first time you push a trusted image, Docker will create a root key for you, you will also need a repository key for the image, both will prompt for a user defined password.

Your private keys are in the ~/.docker/trust directory, safeguard and backup them.

The DOCKER_CONTENT_TRUST is just an environment variable, and will die with your shell session but trust validation should be implemented across the entire process, from the images building, the images hosting in the registry through images execution in the nodes.

Description: Containers are much more numerous than virtual machines on average, they are lightweight and you can spawn big clusters of them on modest hardware. That’s definitely an advantage, but it implies that a lot of software entities are competing for the host resources. Software bugs, design miscalculations or a deliberate malware attack can easily cause a Denial of Service if you don’t properly configure resource limits.

To add up to the problem, there are several different resources to safeguard: CPU, main memory, storage capacity, network bandwidth, I/O bandwidth, swapping… there are some kernel resources that are not so evident, even more obscure resources such as user IDs (UIDs) exist!.

Best Practices: Limits on these resources are disabled by default on most containerization systems, configuring them before deploying to production is basically a must. Three fundamental steps:

Control groups or cgroups are a feature of the Linux kernel that allow you to limit the access processes and containers have to system resources. We can configure some limits directly from the Docker command line:

This will limit the container to 2GB main memory, 3GB total (main + swap). To check that this is working, we can run a load simulator, for example the stress program present in the ubuntu repositories:

You will see a ‘FAILED’ notification from the stress output.

If you tail the syslog on the hosting machine, you will be able to read something similar to:

Using docker stats you can check current memory usage & limits. If you are using Kubernetes, on each pod definition you can actually book the resources that you application need to run properly and also define maximum limits, using requests and limits:

Description: Containers are isolated black boxes, if they are doing their work as expected it’s easy to forget which software and version is specifically running inside. Maybe a container is performing like a charm from the operational point of view but it’s running version X.Y.Z of the web server which happens to suffer from a critical security flaw. This flaw has been fixed long ago upstream, but not in your local image. This kind of problem can go unnoticed for a long time if you don’t take the appropriate measures.

Best Practices: Picturing the containers as immutable atomic units is really nice for architecture design, from the security perspective however, you need to regularly inspect their contents:

The are multiple Docker images registry services that offer image scanning, for this example we decided to use CoreOS Quay that uses the open source Docker security image scanner Clair. Quay it’s a commercial platform but some services are free to use. You can create a personal trial account following these instructions.

Click on the + symbol on your top right and create a new public repo:

We go for an empty repository here, but you have several other options as you can see in the image above.

Now, from the command line, we log into the Quay registry and push a local image:

Once the image is uploaded into the repo you can click on it’s ID and inspect the image security scan, ordered by severity, with the associated CVE report link and also upstream patched package versions.

Description: Your software needs sensitive information to run: user password hashes, server-side certificates, encryption keys… etc. This situation is made worse by the containers nature: you don’t just ‘setup a server’, the microservices are plenty and may be constantly created and destroyed. You need an automatic and secure process to share this sensitive info.

First, let’s see how to capture an environment variable:

Is that simple, even if you su to a regular user:

Nowadays, container orchestration systems offer some basic secret management. For example Kubernetes has the secrets resource. Docker Swarm has also its own secrets feature, that will be quickly demonstrated here:

Initialize a new Docker Swarm (you may want to do this on a VM):

Create a file with some random text, your secret:

Create a new secret resource from this file:

Create a Docker Swarm service with access to this secret, you can modify the uid, gid, mode, etc:

Log into the nginx container, you will be able to use the secret:

This is a minimal proof of concept, at the very least now your secrets are properly stored and can be revoked or rotated from a central point of authority.

Description: In the former sections, we have covered the static aspect of Docker security: vulnerable kernels, unreliable base images, capabilities that are granted or denied at launch-time, etc. But what if, despite all these, the image has been compromised during runtime and starts to show suspicious activity?

Sysdig Falco is an open source, behavioral monitoring software designed to detect anomalous activity. Sysdig Falco works as an intrusion detection system on any Linux host, although it is particularly useful when using Docker since it supports container-specific context like container.id, container.image, Kubernetes resources or namespaces for its rules.

Falco rules can trigger notifications on multiple anomalous activity, let’s show a simple example of someone running an interactive shell in one of the production containers.

First, we will install Falco using the automatic installation script (not recommend for production environments, you may want to use a VM for this):

And then we will run an interactive shell in a nginx container:

On the hosting machine tail the /var/log/syslog file and you will be able to read:

Sysdig Falco doesn’t need to modify or instrument containers in any way. This is just a trivial example of Falco capabilities, check out these examples to learn more.

Docker itself is build with security in mind and some of their inherent features can help you protecting your system. Don’t get too confident though, there is no magic bullet here other than keeping up with the state-of-the-art Docker security practices but there are a few container-specific security tools that can help giving battle to all these Docker vulnerabilities and threats.

Hopefully these simple examples have stirred up your interest in the matter!